Eddy Current Testing(ECT) is one of part of Non- Destructive or NDT methods, used to detect flaws or discontinuity in Conducted materials using Eddy Current.
These terms may be strange to you, If do, Then, Don’t worry, I will start from scratch, So, you never have to confuse about terms and before going you have cleared the concept regarding the eddy current test as well.
So, Seat back and relax and let’s start the journey of Eddy current inspection in front of you and at your fingertip.
Before, Moving to the title of the article, there is some basic information, which you need to know to get understood properly like- What is eddy current and How does it work. This will further help you know When these terms will arise further in this article.
So, Let’s Get started…

What is Eddy Current?

How does It Work?

When a current is induced in the solenoid coil, it generates changing magnetic field or Magnetic Flux in it. 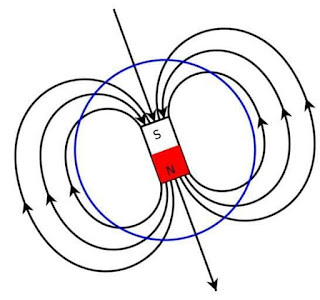 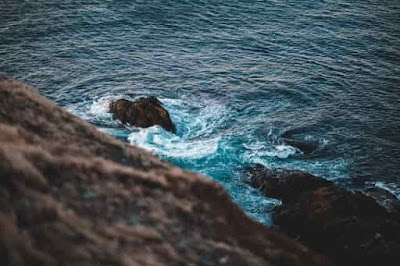 That was some key definition and working, Which you read above, will help you to understand more clearly. Now, I am going to head on to the main topic of the article.
Are you ready?
Then, Let’s get started from basic and, we will both move to advance little by little in a digestible manner.
First of all, I will start with the Definition of Eddy current inspection in NDT, Principle and its working and more on down the road. So, stay with me and scroll gently and slowly.

What is Eddy Current Testing?–

A method of Non-Destructive testing, where a conducting material is inspected by the help of Eddy Current, Known as Eddy Current testing. 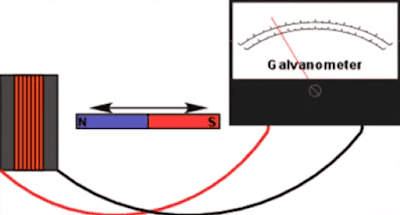 This was the principle of ECT. Now, I am moving to how does ECT works and the procedure of ECT.
I hope, You gaining knowledge and clearing your concept through this extensive guide. If so, Then stay with me and move your finger slowly, because more is to come on the road. So, why miss?
Isn’t?

How does Eddy Current Testing Works? 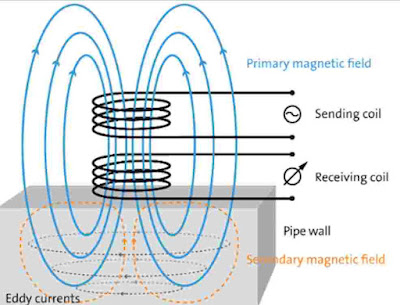 The various procedure is followed, when Eddy current inspection is done. Have a look at these steps-
Induction of Current–
A probe carrying a primary magnetic field, taken to near the surface of a conductive test piece, due to the primary magnetic field, Secondary magnetic field induced in the test piece and hence form an eddy current in the test material.
Detection of Discontinuity-
When current is induced in the test specimen, fluctuation of current can be seen in the current meter, if any discontinuity is encountered in the test specimen due to a change-in eddy current. See the picture below.
Identification-
When the change in current is encountered on the display,  this indicates any discontinuity or flaw in the specimen. Then location is marked and sent to repair If needed. 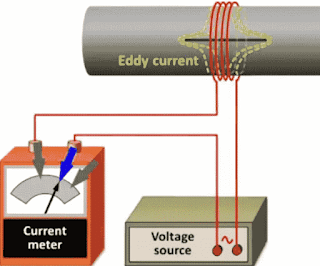 Basically, two eddy current testing equipment is used –
1. Straight or Angled Probe
2. Analog or Digital Meter
1. Straight or Angled Probe-
Probes are used to insert a magnetic field in the conductive materials and hence measuring the change in eddy current. Probes can be straight or angled, according to inspection condition or structure of test material.
2. Analog or Digital Meter-
A display is used to see the change in current and hence the location of the discontinuity. The display can be analog or digital.

Absolute probes are single coil probes used to sense changes in magnetic field or change in eddy current. It is also known as Single-ended probes. 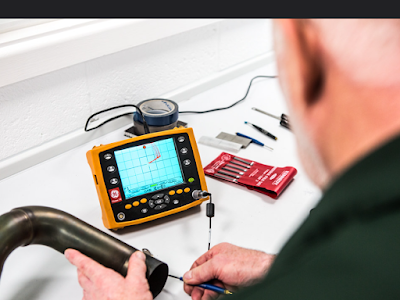 Here are frequency and its factors consider during the test-
Now, I am moving into the advantages, disadvantages, limitations and applications of Eddy current inspection.
So, here we go…

The various advantages of ECT, Given below-

The various Disadvantages of ECT, Given below-

The various Limitations of ECT, Given below-

The various Applications of ECT, Given below-
I hope, you enjoy reading. If so, more are coming to you, Stay with
me.
Now, here are some specific testing done through ECT. Given below, Have a look-

Ect is used to test tubes in effective ways, Where a probe is inserted in the tube hole to the desired length and hence results can be observed on the display or monitor.
various flaws like corrosion, cracks, pitting and so on, can be easily detectable through this technique.
Tube testing is basically performed in the boiler, chemical industries, gas pipelines, air conditioning lines, etc.
More on eddy current testing of tube

Heat exchanger tubes are being used to regulate the temperature of fluids. where the Circumferecial structure of tubes is very difficult to detect.
That’s why ECT is the best method to inspect heat exchanger tubes, Where Absolute probes are inserted to the desired length and seen any variation in current on the display.
Shown in fig- 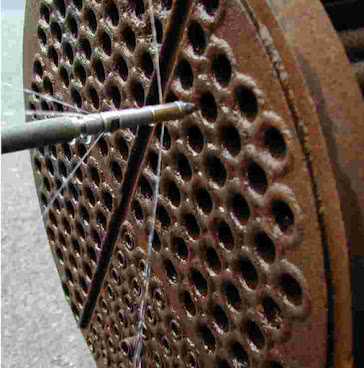 Chiller tubes are basically used in various mechanical industries, Where the cooling agent is pumped into the chiller tubes caused to cool out the outer liquid.
As I mentioned, eddy current inspection is a widely used method to inspect tubes and hence chiller tubes are inspected through the same process as we go through the testing processes of other tubes.
It is a pretty fast method to inspect tubes, once the initial setup is done.
Shown in fig-

The condenser is used to condense gaseous substances into liquid form using the cooling agent. Condensers are also used as heat rejection appliances in various mechanical and chemical industries.
As far as testing of condenser tubes is concerned, This also tested as same technique as other tubes through ECT.
The absolute probe is inserted to the end length of the tube and reading is seen on the display.
Read More in detailed eddy current testing of condenser tube

Eddy current array is the modified version of Eddy current testing, Where series of the coil is used to detect the flaws.
The coil is activated in the sequence to remove the inference between coils.
The series of coils offers a wide range of coverage and even helps to identify circumferential discontinuity without rotating the probe unlike eddy current inspection and hence saves much time.
This video guide will help you to get more clarity about the eddy current array inspection of carbon steel. Give a watch-

The magnitude of induced eddy current depends on the following factors–

Eddy current testing is the widely used and hassle-free testing method. As you gain knowledge about the same in the detailed manner above.
If you are still there and reading this, Hit a share button and share to world out to spread knowledge to the needed one.
Thank you for being with me, bookmark to get the best knowledge about mechanicals and testings.
Hope to see you soon.

Ans. No, it doesn’t give shock due to the very small amount of voltage difference.